Plastics recycling has always been mediocre at best and cannot keep pace with the explosion of plastics on the market—and it never will.

As recyclers struggle with the “recycling crisis” caused by China’s National Sword policy and search for new marketing approaches, the situation is being made all the worse by those capitalizing on the downturn and using it as an excuse to say that recycling has failed. While there is no doubt that China’s actions have upended the recycling industry’s “business as usual,” there’s something bigger bubbling to the surface: a watershed moment on the future of “junk” plastics.

We as the recycling industry need to be honest: Plastics recycling has always been mediocre at best and cannot keep pace with the explosion of plastics on the market—and it never will. The use of plastics has increased twenty-fold in the past 50 years, yet only nine percent of plastics made since 1950 have been recycled. Most of those plastics that were recycled were down-cycled into lower-grade, single-use products rather than kept in a continuous loop.

Yet recyclers now find themselves on the frontlines of this international crisis. As an initial response, we need to rapidly develop stronger domestic markets for plastics recycling and more expansive education programs to reduce contamination. We also really need to stop the onslaught of plastic waste by first acknowledging that recycling alone cannot solve the problem. Then, we need a meaningful dialogue with all stakeholders, including the plastics industry, about how and when plastics do or don’t fit into the circular economy of the 21stcentury.

The Real Problems with Plastic

Let me clarify that this isn’t a tirade against all plastics: Plastics play a valuable role and have led to many advancements in medicine, technology and transportation. However, the gravity of the environmental, health and climate issues from the explosion of plastics in just half a century demonstrates that we can no longer turn a blind eye to the challenges they’re creating.

Here’s a sampling of the staggering problems unfolding worldwide:

Simply put, if the images of turtles choking on plastic bags and remote islands covered with plastic litter don’t turn your stomach now, just wait—it’s only going to get worse if we don’t change course soon.

We as recyclers need to coalesce on a vision and platform for change so we’re not just fighting against junk plastics, but organizing around a concrete game plan toward a better future. I suggest we start building from the New Plastics Economy vision put forth from the Ellen MacArthur Foundation.

Ellen MacArthur has quickly become a leading global advocate for the circular economy and its environmental and financial benefits. The group has the attention of some of the world’s largest companies and top level EU policymakers. Its 2017 report, “The New Plastics Economy: Rethinking the Future of Plastics & Catalysing Action,” lays out a 50-30-20 plan for plastics—50 percent of plastics would be recycled, 30 percent would be redesigned and 20 percent would be replaced with reusable alternatives. 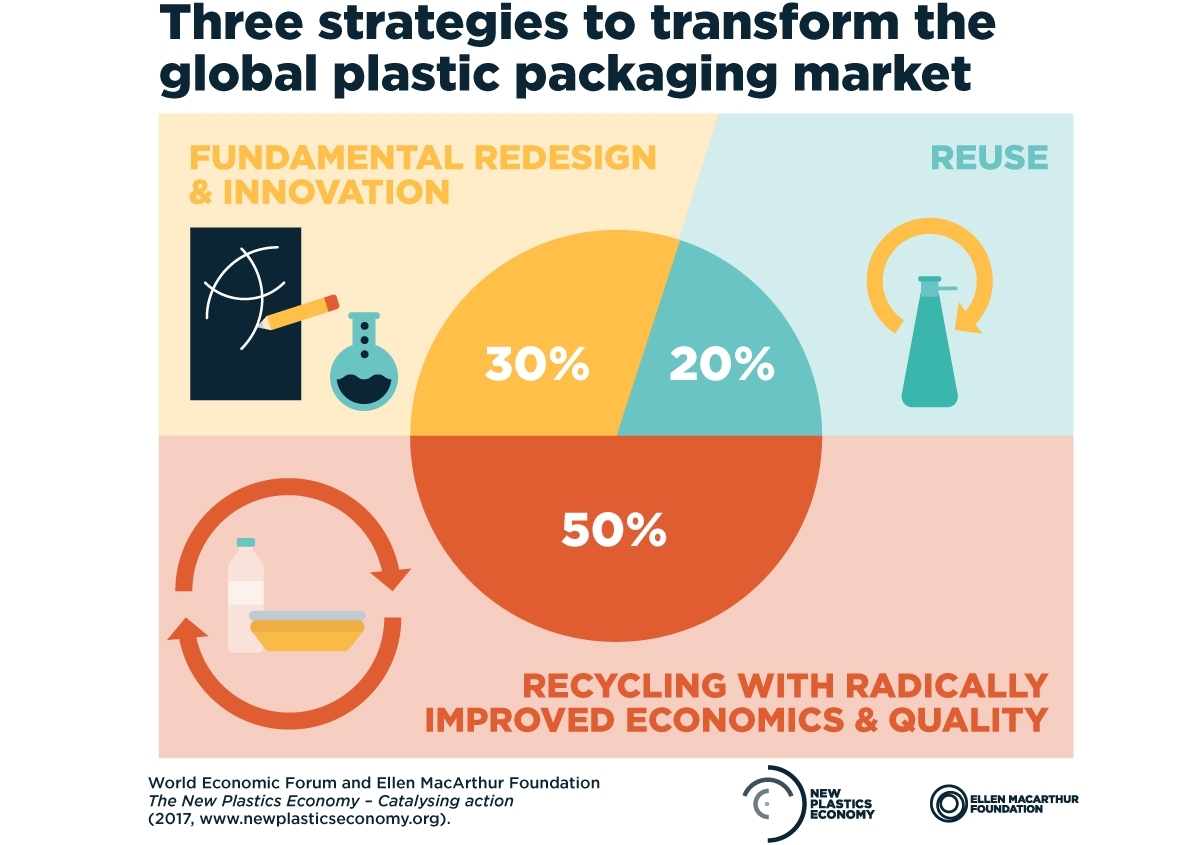 This is a powerful vision for several reasons:

Partially resulting from this work, the EU recently announced its goal to make all plastics reusable or recyclable by 2030.

Is this 50-30-20 vision the precise formula that will work for the U.S. recycling industry and our communities? That’s a big, long conversation to be had with many others—industry, government, NGOs, consumers, etc. But the point isn’t exactly how the numbers should shake out. The point is that it’s time to change. We need a new path that doesn’t accept the projected onslaught of plastic waste as a given.

Recyclers have the spotlight now, whether we like it or not. Let’s make this a turning point and use our power and our voice to reframe the discussion and create a future that better serves our health, our economies and the rest of the planet.

“The more clearly we can focus our attention on the wonders and realities of the universe about us, the less taste we shall have for destruction.”

Let's build together a sustainable world